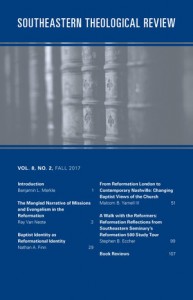 The latest issue of the Southeastern Theological Review came out today, and it focuses on the 500th anniversary of the Reformation. You can see the cover to the left, but it contains articles by Nathan Finn, Malcolm Yarnell, Stephen Eccher, and myself. Nathan’s essay and mine come from presentations given at the REF500 event at Union earlier this year.

My essay is titled, “The Mangled Narrative of Missions and Evangelism in the Reformation,” and is a continuation of work on a topic I’ve returned to a few times over the years. I chose “mangled narrative” for the title because the truth on this issue has been obscured over the years. In the minds of many people, it is an established fact that the Reformers, particularly Calvin and Luther, had no interest in evangelism or missions. However, this is completely untrue and unfair. In my essay I trace this opinion back to an influential 19th century German missiologist, Gustav Warneck, and argue his anachronistic definition of missions caused him to completely miss the Reformers. Although there is good scholarship debunking Warneck, most of the English language surveys of missions have simply repeated Warneck over the last century without engaging the scholarship which has contradicted him.

When we understand what the Reformers were doing, and when we actually read their own words we find a passion for souls which will convict us today. Rather than passing on the slander of our brothers, we’d do well to learn from these men who endured more than many of us can imagine and labored intently for the salvation of souls.