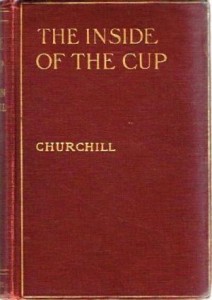 No, not that Winston Churchill. I’m referring to the American novelist who was quite famous in the early 20th century. I listed his novel, The Inside of the Cup, as one of the most intriguing books I read in 2015. I had hoped to write something more extensive about the book, but as typical I have not.

This book, which was the bestselling book in the US in 1913 and made into a movie in 1921, is informative and intriguing. The protagonist, John Hodder, is a young pastor with charisma. He has recently been called from a small pastorate to the big church in the big city (which, though not named, is supposedly modeled after St. Louis). He is earnest and idealistic, upholding the historic truths of the faith which so many are abandoning. The older members of the large church are excited for him to come so that they might have a young man hold forth the old ways. Early on he takes a difficult stand on biblical ethics even when it distresses a church member. That portion of the book provides a good model of what pastors must often do even though it is hard. Early on in the book, I thought this might provide an exemplary portrait of pastoral ministry.

However, before long a change begins. Orthodoxy is portrayed as comfortable truths which insulates the powerful, protecting their position while giving them the cover of religion. Orthodoxy then is, at best, unaware of, and, more often, unconcerned for the poor and the oppressed. The pastor, John Hodder, encounters real people who have been hurt by the inhuman business practices of his leading church members and begins to reconsider his commitment to orthodoxy. Churchill portrays a brave, noble transformation as Hodder throws off doctrinal truths in favor of a social gospel.

What makes this a useful read, then? For one thing it provides a front row view of the issues fomenting in the church in the early 20th century. This book was published just 10 years before Machen’s Christianity and Liberalism. The reception of Churchill’s novel shows how this doctrineless, non-supernatural “gospel” appealed to people at the time. Secondly, it is effective propaganda. No one would want to support those who are for orthodox doctrine in this story. They are all greedy, heartless individuals who really care for Jesus no more than they do for other people. Thus, and thirdly, the book gives us a portrait of how orthodox Christianity is seen by many people. That the portrait is terribly false does not change the fact that it is common. It would be a useful exercise to work through the situations of this book discussing with others how true orthodoxy should respond, holding fast to biblical truth and showing how that relates to caring for hurting people. One thing that would become apparent is that a faithful ministry would be required to confront the powerbrokers in this church for their treatment of people. One need not jettison doctrine to do this; rather, adherence to the Scriptures will require it! A lack of careful pastoral oversight as well as formative and corrective discipline got Hodder’s church into the situation it was in.

More could be said, but perhaps this will suffice. This is not a great novel but an intriguing one which poses good questions for ministry today.